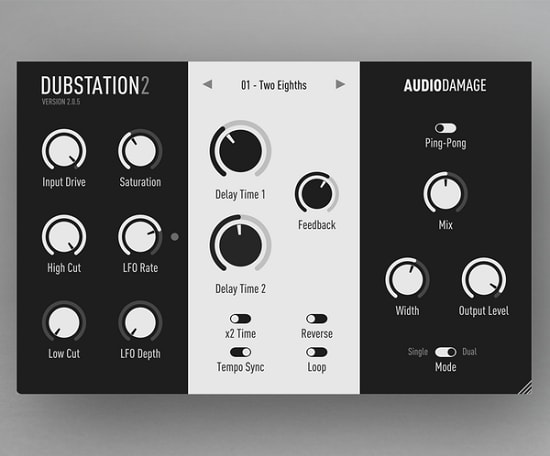 The original dub delay plugin and still the best! Dubstation 2 takes our most popular product and adds a whole raft of new features, including a dual mode for separate control over the left and right delay times, ping-pong, a new feedback saturation algorithm, and an LFO. Along with an all-new procedural and Retina-friendly user interface and (FINALLY!) ProTools compatibility, this represents a major leap forward for one of our signature products.

All those bells and whistles aside, the heart of Dubstation is our painstaking bucket-brigade delay model. Often imitated, but never duplicated, Dubstation has been the go-to plugin for that sound for over a decade, used in thousands of commercial productions, and with good reason. With the addition of the LFO and saturation controls, Dubstation has moved in to the realm of tape delay emulation as well, and is a sonic Swiss Army knife for delay.

– Added “Width” control; this controls the stereo width of the wet signal. At 100% the left and right delays are hard-panned (original topology); at 0% they are centered, making the wet signal effectively monophonic.