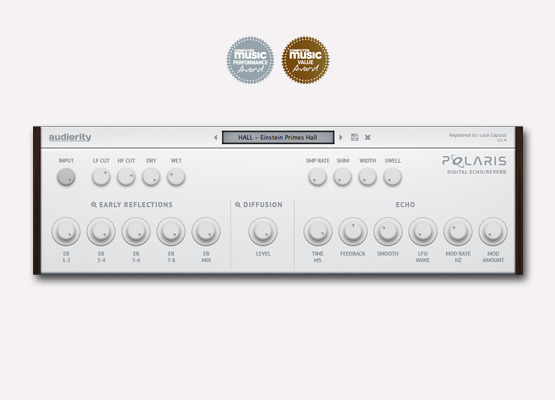 Polaris is an echo/reverb plugin inspired by early hardware digital reverbs of the late 1970s (like the Ursa Major SST-282) and able to provide echo, ambience and reverb out of a single multitap delay line.

When hardware digital reverbs came out to the market they were really expensive. Most manufacturers were already exploiting chains of comb and allpass filters (smoother reverbs, but expensive in both resources and chips), there were other techniques involving the use of a single multitap delay line to create a reasonable reverb while keeping the cost affordable.

That idea is so simple yet powerful: you mix a bunch of unmodulated taps (Early Reflections) with the remaining modulated taps (Diffusion) to create a cheap but convincing reverb.

We extended this technique by making the Echo tap recirculating with the Diffusion section, allowing longer reverb tails. Furthermore you can easily edit all taps to create your own room responses, resonant combs, Karplus-like tuned delay lines, Chorus, Flanging, Vibrato and much more.

From v1.3 we introduced a Swell feature that will smooth the transients of the incoming signal, with its attack time automatically matching the delay time. This new feature works great for ambient guitars, intense endless pads and much more.

From v1.5 we introduced Pre-Delay, Modulation Boost and a 3 Band Feedback Equalizer on the new Echo editor page.