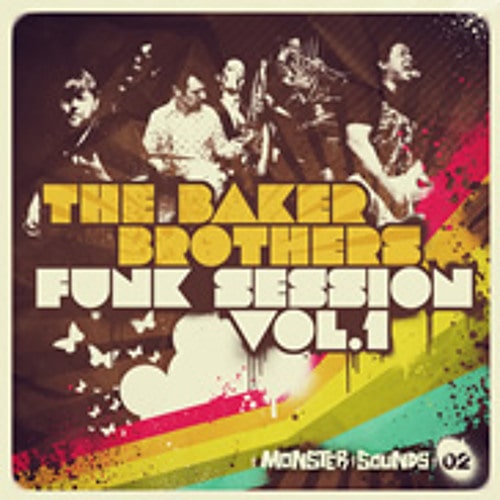 The Baker Brothers have been rocking dance floors far and wide with their huge entertaining live show for nearly 10 years now. With 7 albums and numerous other releases under their collective belt the band have toured Japan and Europe extensively delivering an explosive, killer funk show!

They recently sold out Soho’s legendary Ronnie Scotts and have supported legends such as Sly and The Family Stone, Jools Holland and John Schofield. Their infectious, Raw Beats and Bass Lines underpin edgy Melodic Horns and Funky Guitars. Over their consistently prolific career so far they have gained critical acclaim by the likes of Mr Scruff, DJ Muro, Keb Darge, Florian Keller and The Roots. They have worked with guests such as Average White Band’s Hamish Stewart, Vanessa Freeman of Reel People and UK percussion legend Snowboy.

In this 100% Royalty Free Funk Sample release – The Baker Brothers have laid down some fantastic Funked Up Bass Lines, Keys, Horns, Flutes and Guitars in a truly spectacular collection that weighs in at 1.6GB and includes 645 samples, of which 579 are loops between 86 – 130 Bpm, and 66 Single Shot Samples, all recorded through valve equipment using fantastic mics and captured in pristine 24 Bit.

Producers of Funk, Hip Hop, Breaks, Cinematic and Downtempo styles will be amazed at the quality of these sounds, played by one of the tightest authentic funk outfits currently active today. Also included are 7 ready to play patches for Reason NNXT, Halion, Kontakt, EXS and SFZ compatible Samplers. Apple Loops, Reason Refill and Ableton Live versions are also available separately.

This is a huge collection of what we consider to be the best royalty free Funk Sample Library on the planet, so make sure you check out the demo, and don’t miss out on the freshest funk samples currectly available – until we release vol 2!