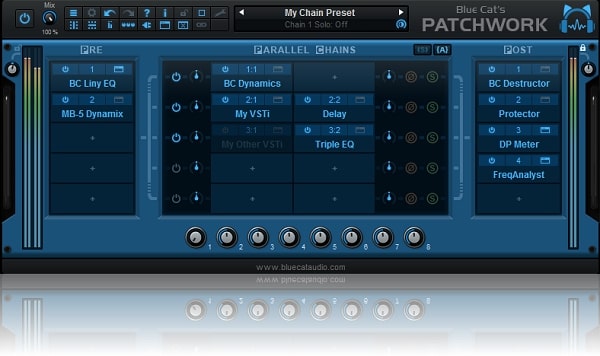 Blue Cat’s PatchWork is a universal plug-ins patchbay that can host up to 64 VST, VST3 or Audio Unit plug-ins into any Digital Audio Workstation (DAW) in one instance.

It is possible to chain effects in series or create up to 8 parallel chains that can be activated independently. This lets you create your favorite effects or instruments configurations within the plug-in, without the need for multiple busses. These configurations can be saved as presets and recalled instantly, or shared with multiple DAWs, using any plug-in format (full list below).

Despite the name, you can forget about wires or cables: configuring plug-ins routing is as simple as adding or removing a row or a column in the rack’s matrix. All plug-ins can also communicate with each other or with the host application using the virtual MIDI ports offered by the plug-in.

For each plug-in slot, latency compensation, presets management, undo/redo integration, audio i/o selection and individual plug-in bypass are included for optimal operation. The plug-in also stores the position of the window for each plug-in so that the layout is restored with your session or saved with presets.

This product is available as an audio plug-in (effect or a virtual instrument) and standalone application, so that it can used alone or inserted on any type of track in your favorite DAW, with up to 16 audio channels.

Input and output level meters are also available to monitor the signal that is dispatched to inserted plug-ins, including side chain and aux channels.

— drag and drop plug-ins between slots
— hold the alt key on Mac and Ctrl key on windows to copy (duplicate) a plug-in instead of moving it.

— drop the plug-in before another to insert it in the chain
— drag and drop plug-ins between several instances of PatchWork or accross plug-ins
(compatible with the latest preview of Late Replies and Axiom).

– Fixed: effect tail not processed when just inserted on a track (avoids using CPU when not necessary)
– Fixed: built-in multitap delay plug-in could get out of sync in some host applications.