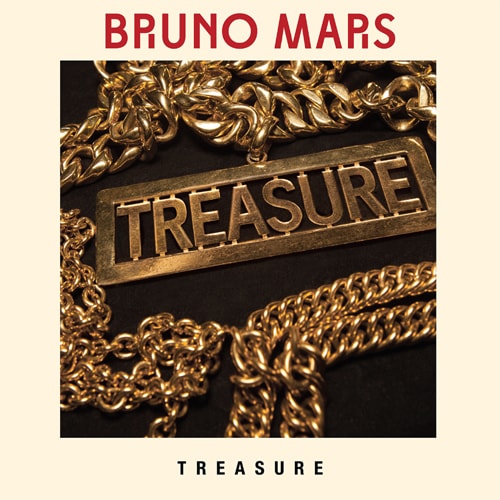 “Treasure” is a song recorded by Bruno Mars for his second studio album, titled Unorthodox Jukebox (2012). It is inspired by Breakbot’s song “Baby I’m Yours”. “Treasure” was written by Mars himself along with Philip Lawrence, Ari Levine and Phredley Brown, while production was handled by Mars, Lawrence and Levine under the name The Smeezingtons. The song is the album’s fourth track and was selected as its third single by Atlantic Records. “Treasure” was first released to mainstream radio in Italy on May 10, 2013, through Warner Music. The track details Mars’ band time of party and fun: Philip Lawrence described it as “the kind of song where the whole band can get up and jam”.[1] It was described as disco, funk, soul and post-disco with R&B elements.

“Treasure” became Mars’ seventh top 10 hit in the United States since his career began in 2010. It has also reached the top-five in countries like Canada, Israel and South Africa. “Treasure” ranked within the top 20 in eight territories. It received media attention for its “funk” vibe, that a few artists have brought back, including Mars. Due to the similarities shared with “Baby I’m Yours” by Breakbot new writing credits were added.

The single was certified three-times platinum by the Recording Industry Association of America (RIAA) in October 2013, representing sales of two million copies, since the certifications for digital singles include on-demand audio and/or video song streams in addition to downloads. An accompanying music video for the song premiered on June 14, 2013. It was shot by Cameron Duddy and Bruno Mars in Las Vegas, Hollywood. The video presents Mars’ band, The Hooligans, in a live performance. The single was performed on the Moonshine Jungle Tour (2013–14) and on the 24K Magic World Tour (2017–18).

“Treasure” was written by Bruno Mars, Philip Lawrence, Ari Levine and Phredley Brown. Mars, Lawrence and Levine form The Smeezingtons; they produced the song under that name.According to the digital sheet music published by Alfred Music Publishing, the song was composed in common time and in the key of E♭ major with a tempo of 112 beats per minute.The chord progression of [A♭M7, (Gm7), Fm7, Gm7, Cm, (B♭)] repeats throughout the song, changing only to end phrases on B♭9sus (A♭/B♭), a deceptive cadence. Mars’ vocals range from the low note of B♭3 to the high note of E♭5. Its instrumentation comes from the guitar, piano, electronic keyboard and bass.

The song has been described as a disco, funk, soul and post-disco track, heavily influenced by R&B. Caroline Sullivan of The Guardian called it a “sprightly disco thumper”. Josep R. Atilano of Philippine Daily Inquirer wrote that Mars was “acknowledging artists synonymous with the 80s in the likes of The Police, New Edition, Billy Joel, Earth, Wind And Fire, and Michael Jackson”.Melissa Maerz of Entertainment Weekly remarked that the song “makes silk-jumpsuit disco feel contemporary,”Andy Gill of The Independent wrote that Mars “demonstrates a keen appreciation of Patrice Rushen’s funk-pop” on the single.In a Slate magazine article, critic Ann Powers said that the song “was a direct homage to the sound and even the look of “P.Y.T.”-era Michael Jackson”. Tina Jamias from AXS.com called the song a “groovy, dance-pop track with sounds and vocals similar to that of Michael Jackson’s “Off The Wall” and “Rock With You”, or Madonna’s “Holiday”.