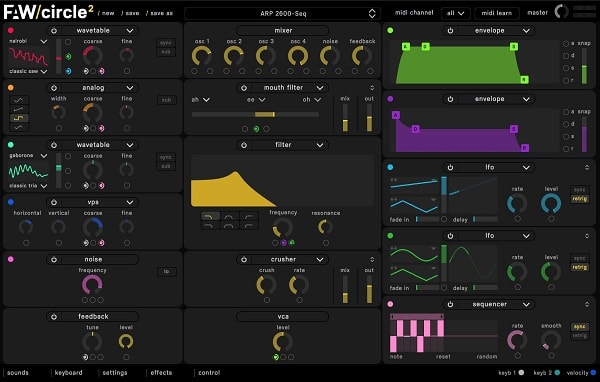 Whether you are designing experimental sounds, producing music in a future-leaning genre or looking for a modern digital synthesizer to complement your existing setup, Circle² enables you to communicate your musical ideas effortless by placing flow and intuitiveness at the core of the music making process.

Designed and programmed in the heart of Berlin, the world’s capital of innovative music technology.

Stay in the Flow
Flow refers to the state of mind in which you are at your most creative and productive, a place where hours pass like minutes and musical ideas become reality. Staying in flow becomes increasingly difficult however, when dealing with the complexities of modern software synthesizers.

By looking at the most important things a synthesizer should do and designing simple work flows around these tasks, FAW feels it has created a synthesizer that is both powerful and complete in its features, yet simple and easy for the musician, sound designer and performer to use, play and stay in flow with.

Key features since Circle V1:
Unique to Circle², the VPS is new type of oscillator, the outcome of a research partnership between FAW and Maynooth University.
Totally redesigned interface. Retina ready and optimised for creative flow.
New Bucket Delay and Tube distortion modules.
Improved preset management via the new preset browser.
Performance enhancements and improved sound via a totally rewritten audio engine.
Utilizes the latest version of JUCE audio framework, resulting in a more stable and future proofed Circle².
Now official support for Reaper, Studio One and Bitwig Studio.
New factory preset bank, full of future leaning sounds, ready for use in your music.
Full 64-bit and 32-bit support, both on Windows and OS X.

Defaults to “My Sounds” bank when saving a new preset.

Fixed automation not being recorded in Live and Pro Tools.

Fixed issue with host buffer sizes not being multiples of 32 causing crackles ( found in FL Studio 20 ).

Fixed crash when sometimes adjusting the delay time in the bottom panel.

Fixed issue with a pitched hum coming from the noise channel of the mixer, this was apparent when the noise module was off, but the mixer channel volume for the noise was not set to zero.