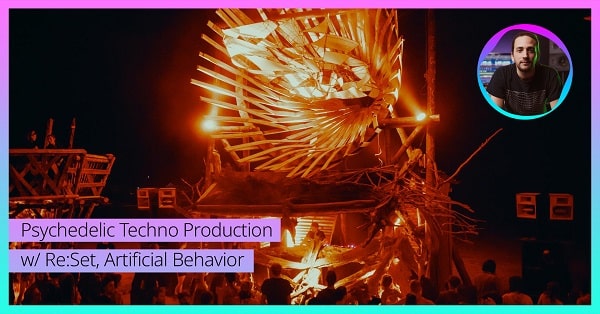 During the webinar, Re:Set will compose a track from scratch inspired by classic ‘Zenon-esque’ psychedelic techno tunes. Together, we’ll develop the main elements, the sound design and the harmonic/structural foundations of the music piece.

You will be taken through Re:Set’s working methods step by step, with clear and detailed explanations on how to approach the creation of all the elements that compose a track. In this phase, a special focus will be put on synthesis, layering and post-production.

We will proceed to an overview on how to create effective drops, smooth transitions, how to work with automations and macros, and how to reach the climax of the track to capture the audience.

This tutorial aims to show how producers use the tools at their disposal to create their soundscapes and transform their ideas into effective music.

The Webinar will be displayed on Ableton Live 10 — But don’t worry, all the production techniques illustrated are suitable for any DAW (Protools, Logic, FL Studio etc.).

Topics will be covered

Following the webinar, Re:Set will share a useful bundle with his students, containing all the tools to create a professional, powerful Psytech track.

Psytech Sample Pack specially created for the students
All the materials shared encapsulate the vision and knowledge brought to you from years of experience and research to find the ultimate dancefloor formula!

PsyTech (or Psychedelic Techno) is a music style that ranges between 125 and 135 bpm, featuring various elements borrowed from the PsyTrance and Techno sonic world.

The main ingredients of psytech are round and powerful hypnotic basslines, heavy kicks and syncopated rhythms combined with layers of minimalistic and mesmerizing sounds. Re:set will provide the students with useful tools and the secret tricks to get to a professional-level sound we love in no-time!

Doesn’t matter if you are not a Psytech producer! This webinar is intended for ANY style of music. The goal is to give you the knowledge on getting the foundation of your song right from the structure.

You will have the chance to watch closely a real dinosaur of music production crafting a full song from scratch in 3 hours, using some pretty advanced and creative synthesis techniques.

Have you been stuck on your DAW for a while? You can expect a lesson filled with notions and secrets that save you an incredible amount of time, boosting you into the next step in the quality of your creations!

On the other hand, Francesco has worked as a sound designer delivering high-quality sample packs for companies like Premier Sound Bank, ADSR and Splice, reaching the 1# position in Beatport Sounds (Drum & Bass) multiple times.

With his classes, he has trained numerous students covering different styles of music from Psy Trance to Dark Prog, Techno, Breakcore and Drum & Bass. With his 12 years of experience and passion for teaching music production, Francesco has guided his students in developing their skills and helping them to achieve their goals in sound sculpting and quality.