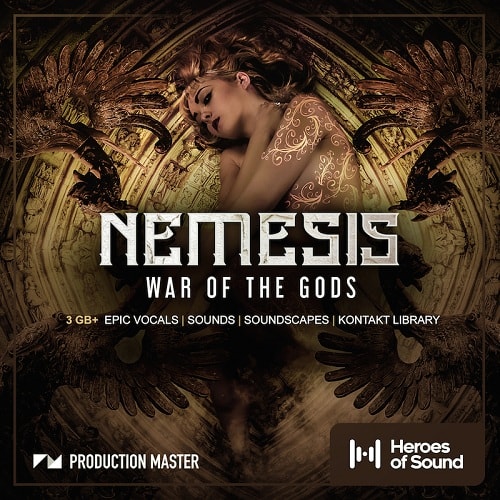 Dive into the most cinematic and orchestral world with “Nemesis – War of the Gods.”, which is undoubtedly one of our most ambitious packs to date. Over 2 years in the works with several cinematic composers, right out of Hollywood and recorded by various singers with an opera background. This is a pack that will take you through various themed cinematic styles; from dramatic tension builders to mystical dark voodoo to angelic highs, “Nemesis – War of the gods.” will take you on a journey of blockbuster proportions!

Vocals, instruments, FX, soundscapes or orchestral percussions; “Nemesis – War of the Gods” has it all! Not to mention the utterly suberb Kontakt library of cinematic choir vocals, perfectly recorded and processed to bring Hollywood level production into your DAW.

Music has always been something of a crucial ingredient when it comes to movies, games and advertisements. Sound design alone has the ability to inflict sadness, joy, excitement and fear into an audience, and acts as one of the fundamental factors in giving these things context and structure. So, if you want to apply some of these methodologies and theatrical techniques to your music productions; we’ve got you covered!

Taking inspiration from Hollywood blockbusters such as Alien, Lord of the Rings, Avengers, Star Wars, Dunkirk and top-sellers in the gaming world like Halo, Fallout, World of Warcraft, Assassin’s Creed and many more – “Nemesis – War of the Gods.” is bursting with the most cinematic, orchestral samples and vocals, ready to be composed with.

This library contains over 3GB of the most authentic orchestral sounds ranging from strings, plucks, brass, woodwind instruments, ethereal pads, soft flutes, angelic choir vocals and atmospheres – right through to spine-chilling FX, hits, pulses, horns and braams, fantastic transitions, risers, reverse FX, hits and booms, as well as dark voices, melodic loops and orchestral percussions. These expertly crafted sounds, vocals and samples will act as powerful assets for evoking the emotions of your listeners, whether you produce music for movies, games, advertising or if you are a dance music or orchestral music producer with an lust for drama.

All recorded vocals have nonsensical ad-libbed lyrics, ideal for soundscapes or layers. All vocals were recorded with a Neumann U87 microphone. You will also find a Kontakt library of the vocals, for ease of use. All sounds were recorded through an SSL SL 4000 G series mixing console and processed through a Universal Audio Vacuum Tube preamp to ensure they keep that full-bodied, canorous degree of sound, which will put your creations a cut above the rest.

Create some cinematic music or to add cinematic elements to your dance music or songs with “Nemesis – War of the Gods.”. Check out the demo and get your copy of this essential library NOW!