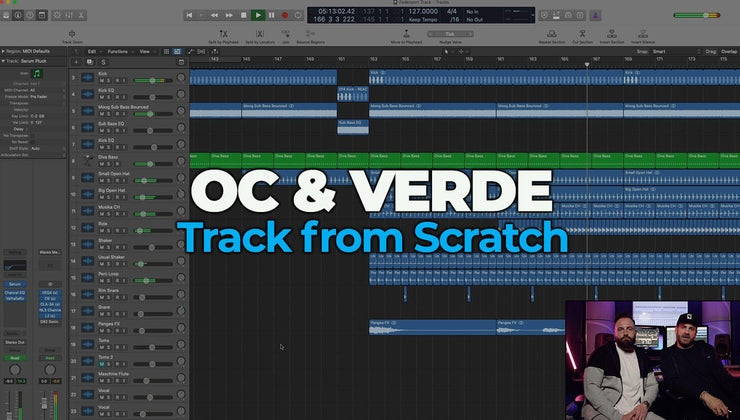 DJ and production duo OC & Verde welcome you into their studio for an in-depth masterclass on creating massive melodic house music.

Jump straight into the mix with DJ and production duo OC & Verde, and witness them build out a massive melodic house track in the unique style that they’ve become known across the globe for. Packed full of unmissable insights into professional music production, this is a complete masterclass in making electronic music, delivered by a duo that are on top of their game.
OC & Verde burst onto the scene in 2016 with a unique sound that sent shockwaves through the electronic music industry. A symbiotic partnership who blend DJing skills with production craft, the duo are as comfortable crafting tracks in the studio as they are at getting crowds jumping in Ibiza. OC & Verde have been heavily supported by Pete Tong on Radio 1 since they started releasing tracks, and are regular fixtures in the Top 10 on Beatport.

This Track from Scratch course is just over three hours in total, and throughout the duration of the masterclass you can expect to discover production tips and techniques that will evolve your understanding of what it means to make great electronic music. Displaying a unique studio workflow that has been honed through years of hard work, OC & Verde demonstrate how to construct razor sharp beats and melodic grooves, craft a balanced mix with space and dimension, flip earworm vocal samples, and work with a bank of software and hardware tools.

OC & Verde conduct the course from their gear-filled studio, working on Apple’s flagship audio workstation Logic Pro. They’ll show you where to find the best loops and one-shots, and how to implement them in a mix and make them your own. You’ll learn how to turn an initial idea into a full arrangement, get a boat load of sound design tips along the way, and even get a glimpse at the mastering chain that they use on their official releases.

Overall, you’ll get eighteen chapters of fantastic content with this Track from Scratch course, and a tailored education in electronic music production that you won’t find anywhere else. If you want to learn from the best and make serious moves in your music production journey, then this is exactly the course for you!