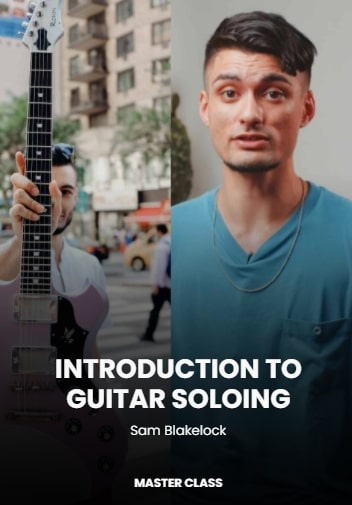 Your guide to a better guitar solo.

Introduction to Guitar Soloing
If you want to solo like the greats, Sam Blakelock will set you on the right path.

What you’ll learn
In this extensive class, Sam deconstructs the art of soloing through the lens and language of jazz. You’ll get an overview of the most important chords, scales, theory, and musical concepts commonly used in jazz, funk, neo-soul, gospel, R&B, and lofi hiphop guitar solos.

Throughout the class, Sam will walk you through the foundational music theory and concepts that make up a great guitar solo.

In Part I. we’ll look explore how to solo over five different songs and introduce the concept of “playing the changes”. Sam breaks up each song into three videos lessons:

Performance: Here, Sam improvises a solo over the song.
Theory: Next, he explains the music theory behind the chord changes and scales he’s playing. We also provide a lead sheet with scales to use and a backing track so you can improvise your own solo.
Concepts: Sam wraps up each song with a discussion of various rhythmic and melodic soloing concepts.
Part II. includes a Scale Library and is more resource than lesson. In addition to a breakdown of 11 useful scales, Part II. includes interlude lessons on two key skills: how to play fast and how to transpose.

In Part III, Sam expands upon the different improvisational concepts he introduced in Part I.

Finally, in Part IV, we’ll wrap up with practical applications of music theory. Here, Sam presents four additional songs and walks you through the theory behind soloing over them.

Who is this class for?
This class is best suited for intermediate guitarists who are looking to move beyond the pentatonic scale and develop their understanding of soloing. Qualified beginner guitarists who are comfortable with jazz chord shapes will also benefit from the course and should keep an eye out for Beginner Tips, which offer simplified soloing options.

Meet your instructor
Sam Blakelock is a Los Angeles-based guitarist and educator. He’s also the founder of Pickup Music.

Originally from New Zealand, Sam earned his Master’s degree in jazz performance from The City University of New York. As a guitarist, Sam has performed all around the world – in off-broadway productions, as a music director on cruise ships, on American Idol, and at iconic venues like the Blue Note Jazz Club in NYC, Smalls Jazz Club, Hotel Cafe, and Carnegie Hall.