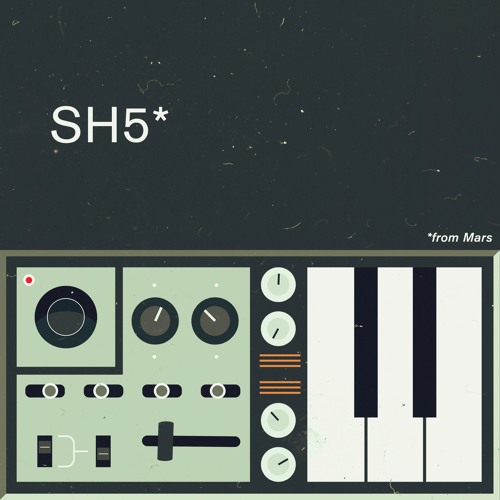 The King of the Legendary SH Series
The top line of the revolutionary SH series is rarely talked about, yet it includes some of the most powerful synthesizers of all time. There’s the SH-101, SH1, SH-3A, SH-7… the list goes on. And while these synths are all excellent sounding in their own right, the SH-5 is undoubtedly the King, with its huge oscillators, multimode filters, extensive modulation possibilities and a brilliant mixer at the heart of it all. In our opinion, the SH-5 is one of this company’s greatest mono synths of all time.

Voice Architecture and History
Produced from 1976 – 1981, the SH5 is similar to the highly sought after System 100 / 700 modular units. It’s built around huge, raw analog oscillators and tough multimode filters that don’t lose bass when you crank up the resonance (unlike the SH-7). There’s also a resonant bandpass filter which can be used in parallel for amazing results.

Add a white / pink noise generator, ring modulation, sample and hold, semi modular LFOs, strong and weak oscillator sync, and it’s no wonder this synth can cover such a wide range of territory. It’s capable of everything from Human League to Hallucinogen and so much more. But genres aside, the SH-5 is a powerhouse of punch, with unbeatable bass, monstrous leads and wild FX.

The Sampling Process
The SH5 we sampled is in excellent condition and tuned to near perfection (OK, the lowest octave is a little off but this actually sounded pretty cool). As with all of our synth sampling efforts, we recorded many of the patches with no processing, so that the true character of the synth could shine. For other patches, however, we went over the top with analog distortion, saturating through tubes, tape, guitar pedals, hardware EQs and analog filters, and finally through Apogee conversion. This combination of recording techniques gives the instruments the widest sonic range possible.

The Parallel Bandpass Trick
The resonant bandpass filter can give you a super punchy and aggressive midrange, or a shockingly deep bass boost, depending on where you’ve set the cutoff. By sending one oscillator to the bandpass filter (with the resonance cranked), and the other oscillator straight to the VCA or lowpass filter, we were able to achieve some of the warmest but simultaneously aggressive basses we’ve ever heard. No other synth at this time (or now?) was capable of this type of processing. In fact, after using this technique extensively we read a Human League interview where they describe how discovering this bandpass filter changed their entire synth sound – pretty much the same experience we had.

In the following example, 6 different bandpass filter cutoffs were multi-sampled and modulated via keyboard velocity.

Another cool technique we used was taking the headphone output and re-routing it back into the audio input to give us over the top harmonic distortion and a kind of vowel shape to the filter.

Huge Polyphony
It may seem obvious but perhaps the best part about sampling this monster was transforming it from a mono synth into a beautiful polyphonic keyboard, capable of lush chords, dark pads, analog vibraphones and insane polyphonic soundscapes. In the following example we recorded two slightly different patches separately (adjusting pitch, LFO and filter) and then panned the results to get an enormous chord progression.

Needless to say, the SH-5 is a legend. The beauty of this synth is that it can sound classic or modern with ease. Head over to the demos for a better sense of the types of instruments we were able to build with this beast.