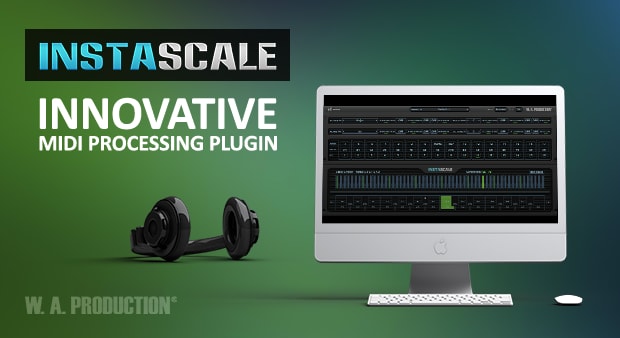 W. A. Production is rolling out another innovative tool to assist you in your song creation adventures. Play your instruments using the brilliant idea of relative notes, rather than the old static approach. Explore the world of scales and expand your creativity in a way that you never have before.

Instascale is a newly invented, scale oriented instrument with only 16 keys to play with. But wait, is that enough? Turns out it’s more than enough. Unlike the standard keyboard instruments where each key can only play a single note, Instascale has a set of smart keys, each one capable of playing different notes. The new note will be based on the given scale, last note’s position and the action of the key assigned to it.

Instascale is available as a MIDI processor plugin that can be used in any DAW that supports VST instrument plugins (with MIDI routing) or AU MIDI effect plugins, given you the freedom to play any instrument you choose without any limitations regarding the sound and hardware.

What can I use it for?

Learning. With all the scales included in the plugin and various information displayed on the interface, Instascale can be a valuable source to study and learn different scales and modes very quickly.
Ear Training. Get familiar with the scales in different keys and modes without having to know how to play them. Train your ear to recognize intervals and distances quickly. Using the home feature you can stay on a certain note and see what feelings it creates compared to the other notes of that scale.
Serious playing. Instascale might seem like a strange and unfamiliar instrument at first but don’t be fooled, like any other instrument with enough practice and dedication you can play a kind of mind blowing music that you could have never done with any other instrument out there.
Experimenting and getting inspired. Considering that you can never hit a wrong note with Instascale, just play random keys and get inspired by the unpredictable but musically pleasant results. Happy accidents always happen. You don’t even have to use your MIDI keyboard, you can use your drum pad/kit, map the pads to the correct keys and start playing. You’d be surprised how cool it feels and sounds.
Breaking the rules. The foundation of the plugin is based on doing things differently, knowing the rules first and then breaking them. So let it inspire you to go even further and find new ways to create music without limiting your mind to the concept of black and white keys and minor and major scales. The plugin guards the rules but lets you change them, bend them or break them. It lets you change the scale, root and home notes on the fly, do crazy runs, it even allows you to create your own experimental scales.
We are sure you will find Instascale fun to use whether it be as an educational tool to learn scales or expand your current knowledge, as an outlet for creativity, as a quick reference, or to be applied to your live set. Just like the creation of music, the possibilities within Instascale are endless and at your fingertips.

How does it work?

Instascale works as a VST instrument and AU MIDI effect plugin. It receives midi data from the controller and swaps it with the processed one. In VST mode the output can be routed to any other instrument in the host application using the available routing functions in that host. The AU version works as a midi effect only in hosts like Logic Pro x that supports the type. There are 16 playing keys that will be used to play the target instrument. What these keys do and where they’re placed on the controller can be customized. They can have static offset values like ‘Home’ or a relative ones like ‘+2’ or ‘-3’. Using this offset value and the previous note, the plug-in calculate the actual note the key plays. you can read more about the playing keys in the manual. In addition to playing keys there are some control keys that can be used to change and control some of the parameters of the plugin like scale and octave directly from the MIDI controller.

Scales. A list of commonly known and used scales such as Major, Minor, Melodic Minor, Harmonic Minor, Spanish, Arabic, Major Pentatonic, Minor Pentatonic, Blues, In Sen, Hirajoshi and more.
User friendly Interface: There are a lot of elements on the interface such as different readouts, virtual keyboards and graphics which help the user have a better experience and get the most out of the plugin.
Edit or Add Scales. Users can edit existing scales or add their own scales (Full version only).

Home Note. The home note can be changed from the root to any other note on the scale making it possible to play different modes or accompany chord changes.
Playing Keys with lots of options. For each of the 16 playing keys, there are two menus. The mapping menu, and the action menu. First one determines where the key is placed on the controller, and includes a list of MIDI notes. The second menu determines what the key does and includes some static and some relative options like ‘Home’, ‘Repeat’, ‘+1’, etc. You can read more about the playing keys in the manual.
Control Keys. There are several control keys that can be set and used to improve live performance. These keys provide an easy access to control and change the scale, octave, root and home parameters using midi notes on the controller.
Root -/+, Scale -/+, Home -/+, Octave -/+. When assigned to a midi note, these keys can be used to change the Key(root), Scale, Home Note and Octave by switching up or down the values.
Scale, Root, Home, Octave Switch keys. These assign a series of midi notes to be used to switch between specific values just by hitting a single note. For example by setting Root Switch to ‘C2-B2’, C2 on the controller will set the key to C, C# will set the key to C# and so on.

Poly: Multiple notes can be played simultaneously. Same notes can be stacked on top of each other to build chords. For example in C major, Home key plus two stacked +2 key will produce C major chord (C+E+G). The order of notes are important. So even if you’re using MIDI editor in your DAW and placing them at the same point in time or even on top of each other, the first note created will be the first one processed and so the second note’s value is based on the first ones.
Octave Shifter: Shifts the output octave up and down. Input octave can also be shifted to a more preferable playing position or to match the host’s labels, using ‘C2’ menu.
Pass through mode: By changing the mode to pass through, users can bypass the plugin play the target instrument normally.
Map Playing and Control Keys: Instascale allows users to change the default settings and map all the keys to desired midi notes. Different keys can have the same offset value making it possible to set interesting playing modes.

User’s manual, online tutorials and support. To get started and learn more about the plugin you can check out the manual and video tutorials. You can always contact us if you had any questions.
System Requirements
Windows 7 and later (32/64 bit)
OSX 10.7. and later (32/64 bit)
The plugin might work on older versions too, but it’s not guaranteed.
Compatibility

Instachord can be used on any software that supports VST plugins with MIDI routing or AU MIDI effect type. But to make sure it’s compatible with yours please try the demo version before you buy (only C Major scale is available in demo version).

The installation instruction will be included in the downloaded package and manual.