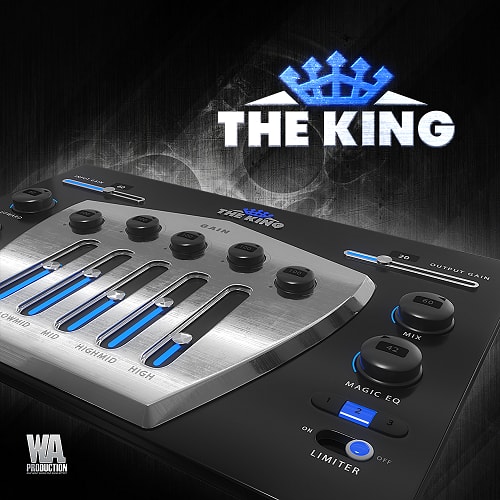 Why should I use The King?

We believe the real question is why shouldn’t you use The King? Let us tell you a little about it. The King is a beast of a creation. It is summarized as a Dynamically Enhances Multi-Band Compression Plug-In. The average joe Multi-Band Compression allows the user to compress all the bands of an audio track, MIDI instrument and or the master rack. They also allow you to change the threshold of each band and the release time, all of the basic, right? Well The King is much more than just increasing some threshold knobs.

Now, sure you can adjust the threshold of the bands. But most, if not all, multi-band compression plug-ins only allow you to mess with three bands, Low, Mid and High. The King is more than just three bands, it allows you to control and adjust 5 total bands, Low, Low Mid, Mid, High Mid and High! But we did say The King was much more than the average joe multi-band compression plug-in. The King Has amazing features such as:

– Magic EQ with 3 different Shapes/ Curves and a built in Limiter!

The King has all of these amazing features for being a Multi-band compressor, but that’s what makes The King different from any and every Multi-Band Compression plug-in on the market!

We want to introduce something we at W. A. Production think is a game changing addition to compression plug-ins. The King comes with an amazing 5 band compression method, a Low, Low Mid, Mid, High Mid and High frequency band selection. This allows the user to dive insanely deep into the customization of each individual frequency section. Being able to adjust the amount of Threshold of each individual band as well as adjusting the Make Up game of each individual band allows for the ability to create an amazing, clear and professional sound that the producer and listeners are sure to love.

We know most if not all Compression plug-ins come with a median of 3 bands (Low, Mid and High), but the team at W. A. Production feel as if that is not enough to really harbor the potential sound of the element effected. We want The King to be every producer’s number one choice when it comes to the world of compression!

The Mix knob in any plug-in, whether it be in an effects plug-in like The King or a Synth plug-in, is very important and can be used in many different ways. The uniqueness of The King’s mix knob is the unctionality of it and the fact that it is not just an ordinary Mix knob. Yes, the Mix knob is the amount of the effected plug-in sound that the user will hear, and adjusting it lets the producer hear what the sound sounded like before The King’s effects and after.

But, you can use the Mix knob as a parallel compressor by simply adding just 30% of the effected sound to the mix. This is a unique effect that brings a really creative and moving sound that we know producers will be happy with.

No need for a third party Limiter!

Using a limiter in any style of production is a must. And most plug-ins don’t supply this feature because they assume you will just use a third party Limiting plug-in. The team at W. A. Production believes that third party Limiters are amazing, and we are not saying you should not use them in your mixes.

However, we believe that we have assembled something that will keep your effect rack clean! The King is unlike any normal plug-in. It comes with a built in Limiter option! A simple switch that keeps the master rack, individual audio file or MIDI instrument from exceeding the 0db mark. The 0db mark is the maximum peak anything in a song, even the master rack, should reach. Anything that passes the 0db mark will cause an action called clipping. The King wants to save producers time and space as well as give a major convenience factor.

The King as proven already has amazing features and capabilities. But it doesn’t stop there! The King wants producers to have FULL control over the sound they are effecting, so we have implemented an Upward and Downward Compression. These effects are two separate knobs on the interface of The King, adjusting either the Upward or Downward Compression knob with increase or decrease either compression.

Both knobs default at 100 and can go all the way down to 0 and or all the way up to 200. We have also added a Time knob, which allows producers to adjust the attack and release time of the Upward and Downward Compression. We love how both of these compression options compliment the mix of the Multi-Band elements added to the Magic EQ. We think this effect will add a great sound to any of your master racks, audio files or MIDI instrument!

Beef up your sound with Magic EQ!

The amazing team at W. A. Production has designed and developed another ground breaking feature into The King that we KNOW will prove very affective in any and every track it touches. The King’s Magic EQ is an amazing development that allows the users to add and amazing EQ on whatever they’re effecting whether it be a master rack, audio file and or MIDI instrument.

The Magic EQ has 3 different shapes/ curves that are designed mainly for cleaning. The 1st option is designed to clean up the muddy frequencies on the frequency spectrum to give the effected element a cleaner sound. However, the 2nd and 3rd options on the Magic EQ are primarily meant for the master racks of a project. Designed to fixate on cleaning up a wide variety of elements at one time while again cleaning up the muddy frequencies and amplifying the clean up. The 2nd option is a lighter and less intense effect while the 3 rd is a more intense sound. Using either of these 3 options in your projects is a sure fire way to bring the most power and beauty out of your mixes!