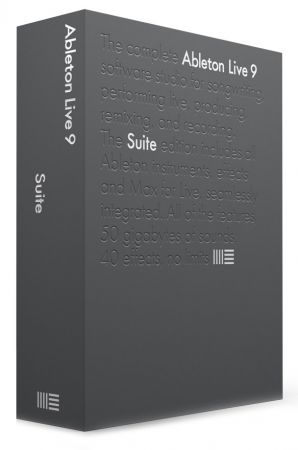 Ableton Live lets you easily create, produce and perform music within one intuitive interface. Live keeps everything in sync and works in real-time, so you can play and modify your musical ideas without interrupting the creative flow.

Live comes with a versatile collection of instruments, sounds, kits and loops for creating any kind of music and provides a full complement of effects to tweak and process your sound.

Ableton has updated Live 9 to v9.7 which brings more sample slicing options, a new drum layout and on-screen display improvements to Push, Ableton’s hardware instrument. Plus you can route audio or MIDI right from the unit, so you can stay in your flow while you switch ins and outs for sampling and resampling. And if you don’t use Push, the new slicing capabilities are now features of all editions of Live 9 – from Lite to Suite.

New Simpler Slicing modes (Beat, Region, Manual) are now available.
As a consequence of the new Simpler features, Live Sets created with this version cannot be opened with previous versions anymore.
The beat time of connected apps in a session will be aligned when starting Live’s playback with Tap Tempo or via Looper.
Updated manual, lessons and info text translations.

Live would crash when canceling a freeze action, if this was performed on a previously frozen and flattened Clip.
Live would crash at startup if the preferences were corrupted. Fixed a crash that could occur when using the ‘x2’, ‘:2’, or “Warp As” controls in Simpler, if there was no sample present.
Fixed a crash which might occur when creating a time selection on Group tracks in Arrangement View.
Live would crash when exporting a MIDI file on Windows.
Live would crash when converting a Simpler to a Drum Rack if certain Control Surfaces were enabled.
When resizing the left edge of a frozen Clip to the left, audio would still begin playback from the Clip’s former start position.
When converting Simpler to Sampler, the Sample Start marker would be visually misplaced.
The signal of send for grouped tracks would be doubled (+6dB), if the track’s output was routed to Master and the respective Return track ‘Pre/Post’ toggle was set to Pre.
When dragging unwarped Clips over the section of a song where the tempo was automated from a low value to a higher one, Clips stored in the clipboard would appear after the dragged Clip.
When running Live as a ReWire slave on a Mac, it would consume 100% of the CPU load after launching Live as a slave for the second time.
Converting an Audio Clip from Looper to MIDI would cause the Clip to assume a grey color.
When resizing a Clip past its limit, the dragged edge would behave erratically when it was not on a grid position or when the grid was disabled with a modifier.
When resizing Live horizontally, the positioning of Max Device windows would not adjust correctly.
When exporting audio from Looper, the resulting Clips would inherit the wrong color. Live might run into issues when writing files to disk on Windows, if the file path contained non standard unicode characters.
Using 3 APC 40 units in ‘Combination Mode’ would cause LEDs on the APCs to flash erratically.
Some audio clips from the Core Library would open in the wrong tempo.