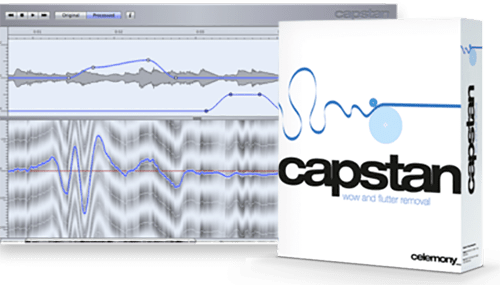 Countless recordings of renowned orchestras, big bands and rock groups are currently slumbering deep in archives. Yet they are unusable, simply due to wow and flutter. The tapes worthless, the recordings lost to posterity. Until now.

For, in Capstan, there is now for the first time a program capable of removing wow and flutter from recorded music. Whether on tape, compact cassette, wax, shellac or vinyl.

Musical intelligence
The Capstan algorithm is capable of recognizing not only the smallest amounts of wow and flutter but also continuous speed variations within the musical material.
Capstan’s detection of notes and their fluctuations is based on the patented DNA Direct Note Access technology made famous by Melodyne, an application used in studios all over the world for the editing of pitch and timing. Unlike Melodyne, however, Capstan employs DNA note detection exclusively to remove wow and flutter by means of varispeed. It allows detailed editing that extends even to letting you draw in the curve by hand.

Precise control
How far Capstan reaches into your music to correct wow and flutter is something you can determine precisely. The corrections are effected using high-quality varispeed, so no artifacts of the kind associated with pitch-shifting or time-stretching algorithms are introduced.
2The medium is irrelevant
Capstan is a purely digital solution that detects the wow and flutter in the music material itself.

Capstan is an easy-to-use and highly efficient solution for the elimination of wow and flutter:

Runs on Mac or PC and requires no additional hardware
Handles all common audio formats
For mono, stereo, multi-channel or multi-track recordings
Detection based on our patented DNA Direct Note Access technology
High-quality, varispeed-based correction free from pitch-shifting or time-stretching artifacts
Works even when a tape has already been copied several times or has been digitized in low resolution

Capstan – demo version
An end to wow and flutter. With this demo version, you can test the full range of functions of Capstan but you can neither save nor export the results. And although the demo version analyses the entire audio file, playback stops after seven seconds. To try it out, locate the critical passages in your material and start playback just before them.

To get you started, we have prepared a small tutorial including audio illustrations. You will find the tutorial in the user manual. The audio files are installed by the demo installation program. Capstan is for the time being only available in English.
=”1″]