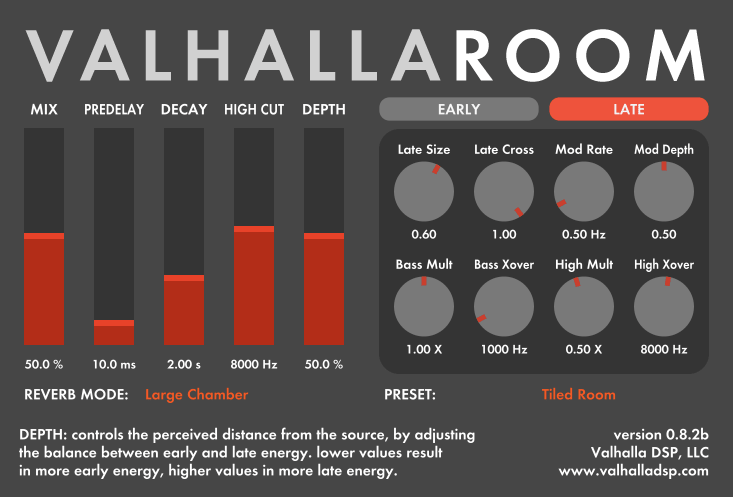 An Algorithmic Vision Of Perfection And Precision. It’s Grade A Class, Number One In Its Division.

ValhallaRoom is a versatile, true stereo algorithmic reverb. It features eleven original reverberation algorithms (including the latest Dark reverb modes, Nostromo, Narcissus, Sulaco and LV-426), and produces a wide range of natural reverberation sounds. Sounds range from tight ambiences and rooms, through traditional hall and plate sounds, all the way up to vast modulated spaces. The algorithm designs have been influenced by some of the “classic” room simulation boxes, as well as state of the art modern theory.

DESCRIPTION
Unique Early reverb section allows user to dial in subtle and short bursts of early reverberation energy, as well as gated reverbs up to 1 second in length.
The Late section produces natural reverb decays ranging from 0.1 seconds to 100 seconds. The decay can be controlled in 3 adjustable frequency bands.
Both Early and Late reverb sections have adjustable modulation, to produce sounds ranging from lush chorusing, to subtle and natural long decays.
ValhallaRoom is true stereo. The Early and Late reverb sections are both stereo-in, stereo-out. The spread of energy between the stereo channels can be controlled over time, which helps preserve the input spatial image.
The GUI has been designed for easy navigation, and is inspired by Joseph Müller-Brockmann, NASA control panels, and Sesame Street.
Resizable GUI. Make it really big, or really tiny, or whatever suits you best.
A comprehensive preset browser makes saving, recalling and sharing settings easy.
Fully compatible with 32 and 64 bit DAWs (32/64 bit VST for OSX and Windows, 32/64 bit Audio Units for OSX, 32-bit RTAS for OSX and Windows, 64-bit AAX for OSX and Windows).
Twelve original reverberation algorithms:
Large Room. Designed to emulate big rooms with a wide spatial impression, with smooth “detuning” modulation.
Medium Room. Sparser than Large Room, with a more random modulation.
Bright Room. A lush, shinier-than-life reverb, with deep modulation and a somewhat slower attack.
Large Chamber. Smooth decay with consistent high echo density and subtle detuning modulation.
Dark Room. A hybrid between the grungy early digital reverbs and the modern algorithms found in ValhallaRoom, with reduced high frequency content, noisy yet lush randomized modulation, a HUGE spatial image, echo density ranging from grungy to dense while retaining clarity, and tons of mojo.
Dark Chamber. Similar to the original Large Chamber algorithm, but bigger and darker, with deeper detuning modulation.
Dark Space. A HUGE dark space, with a somewhat sparser early echo density and deep detuning modulation.
Nostromo. Deep, dark, echoing reverb. Very sparse early echo density, slow density build, random modulation, wide spatial image.
Narcissus. Dark, lush, wide, with random modulation that quickly builds into rich chorusing. The little sibling of Nostromo, but it is still big. Designed for low CPU consumption.
Sulaco. Dark with lush modulation, and a well-centered stereo image. The Late Size control can sweep the reverb from tight rooms to vast echoing spaces.
LV-426. A dark, deep space reverb, with the wide spatial image of Nostromo and Narcissus, but with a much higher initial echo density than either of those reverbs. LV-426 has a somewhat slower attack than the other modes, and has highly diffuse random modulation for lush decays.
Dense Room. Similar to Large Room, but with a denser distribution of early echos, and a tone that is brighter while still having the “darkness” of the Dark algorithms. Great for snare drums!